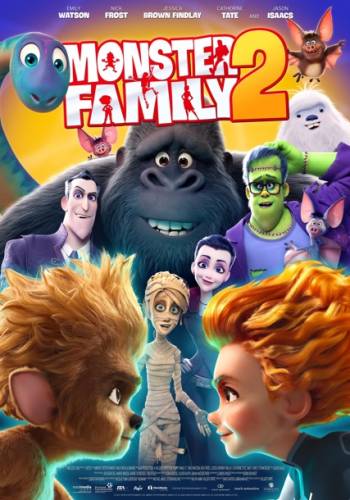 To free Baba Yaga and Renfield from the clutches of Monster Hunter Mila Starr, the Wishbone Family once more transforms into a Vampire, Frankenstein's Monster, a Mummy and a Werewolf. Aided and abetted by their three pet bats, our Monster Family zooms around the world again to save their friends, make new monstrous acquaintances and finally come to the realization that ‘Nobody’s Perfect’ – even those with flaws can find happiness.

Have you recently saved the world and think that entitles you to a lifetime's supply of happiness? Think again! Everyday life has a nasty tendency to bring you back down to earth. A year after the happy end of Monster Family, the Wishbone Family are struggling with their various shortcomings. Son Max (Ethan Rouse) is the smallest kid in eighth grade, the most bespectacled and well ... let's just say, he's built for comfort not for speed. All the girls in his class are at least a head taller and make fun of him. Daughter Fay (Jessica Brown Findlay) has the feeling that all her friends are talented at something (singing, dancing, science) but she’s not. Mum Emma (Emily Watson) tries to help her children, but her advice is at best ignored and more often than not seems to seriously annoy them. And then there’s Dad Frank (Nick Frost) whose happiness in his new job and more relaxed lifestyle is ruined by seeing his family around him so unhappy.

It’s good news then that the wedding of the witch Baba Yaga (Catherine Tate) and the hunchbacked butler Renfield (both of whom have become part of the Wishbone’s extended family as surrogate grandparents) will provide a much-needed distraction.  What’s not good news though is when seconds before they can exchange their vows, the two love birds are abducted by a girl who's the same age as Max! The girl is supercool Mila Starr (Emily Carey), the only child of billionaire, scientific genius, philanthropist, couple Marlene and Maddox Starr. And so, in Monster Family 2, the imperfect Wishbones meet the most perfect family in the world!

The Wishbones have only one choice, if they want to save Baba Yaga and Renfield they must transform into monsters again. However even as a Vampire, Frankenstein's Monster, a Mummy and a Werewolf they struggle when faced with Mila, who's quick-witted and super athletic in equal measures. And she has high-tech gadgets, including a shrink-ray gun and the state-of-the-art Starr-Copter, that would make even James Bond turn green with envy. In her Starr-Copter Mila travels around the world capturing immortal beings on behalf of her parents. Beings such as Dracula (yes he’s back), Baba Yaga, Nessie, the Yeti and the musically-minded, giant ape King Conga.

But Mila is by no means a bad person. She firmly believes that she is on a mission to save the world because her parents are building a machine that will cure all illnesses! For this they need the very beings Mila is capturing, those who are immune to disease and appear to be immortal.

Max and quick-witted Mila could hardly be more different, so they are bound to constantly squabble, much to the amusement of the audience.  However, with their tumultuous adventures around the globe leading them to Loch Ness, the Himalayas, the island of Tora Tora and finally Starr Inc.'s secret sky-high lab, they'll learn to like each other - even if they'd rather do almost anything else than admit it. However, their relationship begins to shift from frenemies (friendly enemies) to something more when Mila discovers a life changing secret and it is Max who risks everything to save her.

Ultimately each member of the Wishbone family and Mila learn a valuable lesson. Max sees that being tall and strong isn’t important - it's easier to win a girl's heart with courage and kindness. Fay discovers that she has a gift with animals, King Conga. Frank sees his family happy once again. And Emma’s learnt that it's smarter to trust her kids than to constantly interfere. But above all it is Mila who has realised something even more important - she does not have to be perfect to be loved. The Wishbones accept her flaws and all. Yes, every human, every being, is worthy of respect and love. As Max proclaims at Baba Yaga and Renfield's much delayed wedding reception, just before giving Mila a peck on the cheek - "Nobody’s Perfect“.