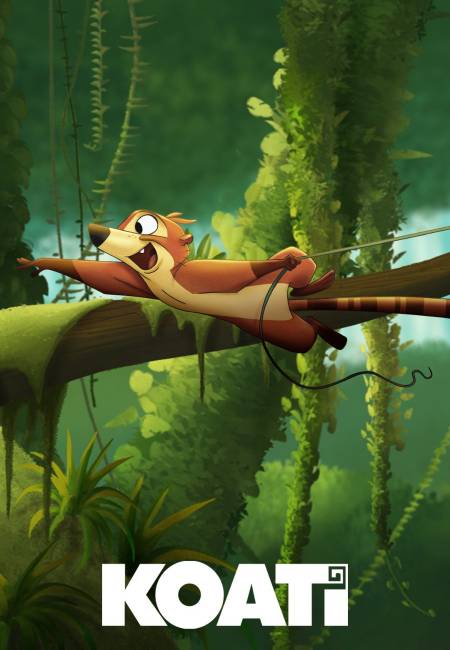 Set in a hidden rainforest of Latin America, Koati tells the story of three unlikely friends who embark on a journey to save their home, “The Land of Xo,” and along the way discover that anyone, including themselves, can be the hero of their own story.

The Land of Xo is where reality and fantasy meet – a place where real forces of nature intertwine with the magic and mysticism of our ancestors and our folklore.

Among Xo’s least “important” inhabitants is an orphaned coati named NACHI – a free-spirited, natural born rebel and loner. As an orphan, Nachi learned to be on his own and fend for himself. He is proud of his street-savvy smarts and doesn’t think he needs anybody. Luckily, there are those in Xo who know even loners need a community. They include AMAYA, a quetzal bird and mother figure for Xo’s misfit children. And BALAM, a wise black jaguar who is Xo’s benevolent leader. Amaya loves Nachi as if he were her own son. Balam treats Nachi like his apprentice, showing him what it truly means to be a leader.

When our story begins Xo and its inhabitants are being threatened by a series of devasting earthquakes. Balam gathers his council to advise him on the best way forward. Present at the council’s meting is COCOPA, the ancient armadillo and sacred shaman of Xo, and ZAINA, a smart but manipulative coral snake. When Cocopa suggests they stay and protect their land, Zaina feigns diplomacy to Balam, recommending they migrate South and tries to convince him, and others, that Xo is no longer safe. But really, she is power-hungry and only using this crisis for her own gain, wanting a new land that she can rule – not as a wise leader, but as an all-powerful queen. In essence it is Zaina, and not the earthquakes, that might be more dangerous to the future of this community.

Unfortunately, before a decision is made another massive earthquake hits Xo. And in a heroic attempt to save lives, Balam is killed, leaving everyone, especially Nachi, devastated and without a leader. Zaina quickly seizes power and uses her seductive charm to persuade the mourning inhabitants to leave Xo and follow her to a new land. Nachi is not fooled by her charm and knows she can’t be trusted. So he decides to turn to Cocopa for guidance, knowing it is what Balam would’ve wanted him to do. But Cocopa’s advice is not so cut and dry. He tells Nachi that he must go on a journey to find the answers he seeks.

There are those who do follow Zaina and her enormous, albeit tiny-brained henchman, the anaconda JITHU, to a new land. But Nachi takes Cocopa’s advice and ventures off on his own quest. Despite his wish to do this journey alone, PAKO, a rambunctious glass frog, appoints himself Nachi’s travel buddy. Being a glass frog, Pako is incapable of concealing his feelings – neither physically nor emotionally, which at first annoys Nachi to no end. But ultimately, it is Pako’s sentimental nature that helps Nachi open up and let others in.

Another initially unwanted tag-along, is XOCHI, a beautiful, precocious monarch butterfly who lacks any social boundaries, but who is utterly fearless!

Together, our trio will discover the cause of the earthquakes, find a solution, reunite with their tribe and rebuild The Land of Xo stronger than before. Because anyone – even a coati, a glass frog, and a monarch butterfly, can be the hero of their own story.